The GRAES - Advanced Encryption Standard (AES) cryptography and the GRECC - Elliptic Curve Cryptography (ECC) cryptography cores combine high throughput performance with seamless integration with the LEON3 32-bit SPARC processor core. The interfaces of the cores are based on the AMBA AHB and APB on-chip buses. The cores are fully integrated in the GRLIB VHDL Core IP library, including the plug&play interface. 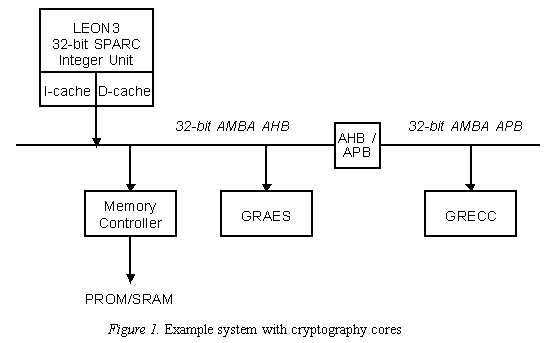 The GRAES core is accessed via an AMBA AHB slave interface. To facilitate high throughput and low latency, the core utilizes the AMBA AHB retry feature to indicate to the processor that an encryption/decryption is still ongoing and that the processor should retry its read access. Alternatively, the core provides an interrupt to indicate when the encryption/decryption of a 128-bit block is completed.

The GRECC core implements Elliptic Curve Cryptography (ECC) which is used as a public key mechanism and is well suited for application in mobile communication. The ECC algorithm provides the same level of security as RSA but with a significantly shorter key length. The GRECC core implements encryption and decryption for an elliptic curve based on 233-bit key and point lengths. The implemented curve is denoted as sect233r1 or B-233. 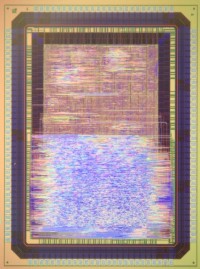 The GRAES and GRECC cores are portable and can be implemented on most FPGA and ASIC technologies.

The GRAES and GRECC cores are available in VHDL source code or as pre-synthesized netlists. They can be delivered for stand-alone operation or with a wrapper for GRLIB AMBA plug&play interface.

The underlaying AES and EEC functions have been implemented in a dual crypto chip on 250 nm ASIC technology as depicted in the figure below.